measuring forces in the microscopic world

Our laboratory specializes in optical tweezers, a single molecule mechanical manipulation technique that allow us to track the activity of individual enzymes, measure the force required to unfold a single protein molecule, or determine strength of binding between individual protein molecules.

In optical tweezers, a single protein molecule is tethered between two beads using DNA as molecular handles. One bead is in the optical trap and the other bead is held by suction on the tip of a micropipette. The target protein is mechanically unfolded and refolded by moving the bead in the optical trap away or towards the bead on the micropipette, thus stretching or relaxing the tether tension between the two beads. 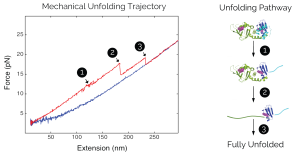 How do optical tweezers work?

Optical tweezers focus a laser beam through a lens to form a “trap”. The interaction of small dielectric objects, such as proteins, with a focused Gaussian beam generates a force in the direction of the field gradient drawing it toward the center of the beam. When the object is displaced away from the center, a restoring force arises. 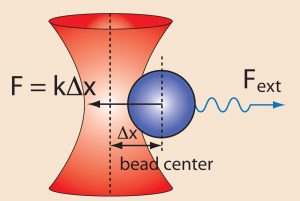